One September morning many years ago I got up early and cycled away from my flat in search of JG Ballard’s childhood.

I was armed with a 1930s map of Shanghai as well as a modern version. I’d watched a BBC documentary following Ballard back to Shanghai in the early nineties the day before and had watched Empire of The Sun again so it would be fresh in my mind.

The streets were fairly empty as I pedalled towards my first goal—Longhua Temple, which was just the other side of Xujiahui from where I lived. During Ballard’s internment Longhua Temple’s pagoda had been converted into a flak tower, each of its levels holding anti-aircraft guns. It was well signposted and simple to find as the site now also holds the Longhua Martyrs Memorial, commemorating the Chinese resistance of Japanese occupation. The pagoda itself had been moved and rebuilt a good kilometre from its original position which to me negated its significance. An entire book could be written on the subject of China’s historical memory, but suffice it to say at this moment—if something old or ancient is bulldozed and even forgotten about, all that needs to be done is for it to be rebuilt with modern means and materials and its historicity is continuous and undeniable: a bit like if Hadrian’s Wall was knocked down and rebuilt from scratch and people said it was nearly 2000 years old… 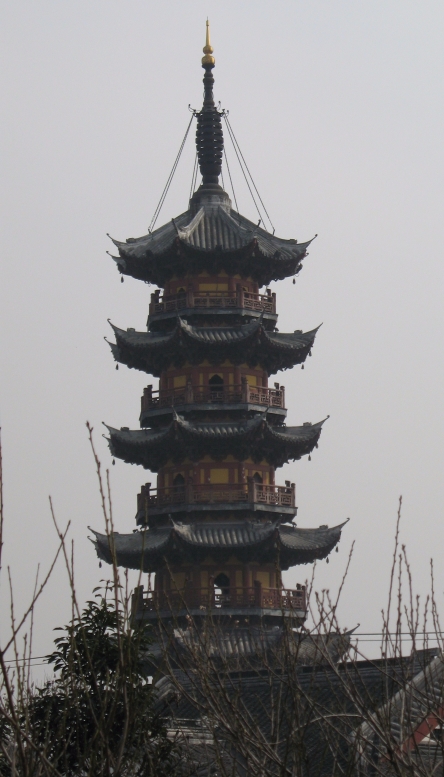 Nearby the pagoda, I cycled through bare alleyways—everything around had been demolished and lay waiting for developers. I saw a row of makeshift houses and huts offering scooter repairs and recycling (common services in old areas of Shanghai for some reason!) and made my way towards them over the canal. To my surprise they had been positioned on top of railway tracks which were visible between the huts; I followed the line as best as I could make out and came out onto a busy road. In front of me lay the former terminal building for Longhua Airport—its distinctive shape and tower long-since converted into shops.

Longhua Airport will be familiar to readers of Empire of the Sun as the airport where the young Ballard would watch from the camp the Japanese fighters taking off, and where he began to dream of flying himself. When I first went there, the airport runway was blocked off and being used as a place for coaches to park; in the years since I’ve seen it completely developed with office buildings and shopping centres being built over it. Today, names like Airport West Rd and the distinctive shape of the terminal are the only indication that an airport was ever there.

I continued following the partially submerged train tracks past the terminal building and along Longheng Rd. From here, the tracks were completely sealed off. I could see the tracks over the wall which were overgrown and rusted—it must have been a long time since they’d been used. At the end of the road the tracks went over a closed bridge across the busy Longwu Rd—on the opposite side someone had hung their washing across the unused train line. But I didn’t want to continue exploring the tracks—that was for later in the story—that was for after the war. I turned left onto Longwu Rd and went in the direction I thought the POW camp would be.

I don’t why I had gone out so unprepared—perhaps I wanted the feeling of discovering something for the first time—but in the case of the camp where Ballard had spent most of the war and that served as a backdrop to the events of Empire of The Sun, I knew its approximate location (past the airport) and that it had been returned to its original function as a school. In my mind I had the image of the school as it appeared in the BBC documentary 20 years earlier. The 1930s map I had of Shanghai didn’t go this far out so I had no idea how long I’d be cycling around before (if ever) I found it.
I cycled past Shanghai Botanical Garden which was one landmark on my route and which told me I was at least going in the right direction. A few turns, wrong turns, u-turns and then I saw it—the gates of Shanghai Middle School with its conifer-lined avenue leading to the familiar image of the old camp headquarters. In front, the flower bed that flew the Japanese flag was still there (minus the flag, of course).

Being a Sunday, the school was closed; not that the guard at the gate would have let me in anyway. I cycled along the perimeter and peered in where I could, imagining the young Ballard being on this spot more than 60 years ago…

This site uses Akismet to reduce spam. Learn how your comment data is processed.